Written by: JI Xing
Translated by: LV Liangjun
Edited by:

“The university has been going on without interruption for a century, which will forge ahead in the next 100 years.” At 10 a.m. on May 10, alumni of HIT from all over the world watched the live broadcast of the Briefing of Alumni at Home and Abroad to Commemorate the 100th Anniversary of the Founding of HIT online through the People’s Daily APP, the Bilibili Official Account and the Weibo Official Account. They all paid homage to the centenary anniversary of the founding of HIT and looked forward to the future in the new era of pursuing more achievements. At the briefing, Xiong Sihao, Chair of University Board, on behalf of HIT, received the school banner that has completed the global transmission. Zhou Yu, President of both HIT and HIT Alumni Association, delivered speech on behalf of the university.

“Alumni are the most precious treasure of HIT. On behalf of the university, I would like to extend my sincere greetings to alumni at home and abroad and express my heartfelt thanks for your concern and support all the time! Because of the epidemic, we can’t meet each other, but our hearts are linked together. Today, we gather on the internet to envision the future of our university.” In his speech, Zhou Yu expressed the hope that alumni would continue to pay attention to and support the development of their Alma Mater, and welcomed people to continue to make suggestions for the work of celebration and alumni. HIT has designated 2020 as the “Year of HIT’s Anniversary”, and will continue to carry out commemoration activities for centenary anniversary of the founding of HIT, and hold a live broadcast of “online HIT’s Anniversary” on June 7.

Zhou Yu said that looking back on the centennial history of HIT, the development of HIT stems from the joint efforts of all the members of HIT and the strong power of the spirit of HIT. This century is one for all the members of HIT keeping forging ahead. Over the past century, HITers who bear their responsibilities in mind have always kept in mind their mission with their original intension of embracing family and motherland. HITers who are realistic and pragmatic have always stuck to the fight with their feet on the ground. HITers who welcome all kinds of knowledge have always demonstrated their commitment with their determination to unite and forge ahead. HITers who are constantly striving for self-improvement have always met challenges with the confidence to go forward bravely.

Zhou Yu expressed his expectation to all the alumni of HIT.

At the briefing, Han Jiecai, Executive Vice President of HIT and Vice President of Alumni Association, introduced the general situation of the university’s work to commemorate the 100th anniversary of its founding. In view of the current situation of global epidemic prevention and control, during the “University Anniversary Day”, HIT will no longer arrange for alumni to return to campus together, but holding “Online University Anniversary” activities instead. At the same time, according to the situation of the epidemic, the university plans to invite alumni back to campus in mid-September. He also introduced the donation work, and said that the university will bear in mind the deep friendship and full support of each alumni, and will make good use of each donation conscientiously and responsibly.

Zhang Simin, a graduate of Applied Optics and Optical Engineering major of 1979 Precision Instrument Department, Vice president of Alumni Association, President of Shenzhen Alumni Association and Chairman of Shenzhen Haiwang Group Co., Ltd, has been carrying for his Alma Mater for many years, and has always spared no effort to support the development of HIT. He said that he would not have his career today without the education of HIT. In the process of entrepreneurship and meeting various challenges, it is the nurturing of his alma mater’s spirit that has given him a powerful force. He deeply blessed his Alma Mater to cultivate thousands of talents with the accumulation of its profound history, while creating the brilliance of the times through shouldering the important task of the country.

In the speech of Jin Haiping, a graduate of 1980 of Mechanical Engineering Department majoring in Precision Machine Design, the founder and president of Taiwei company and the chairman of the board of the Alumni Association of Silicon Valley, said that the best time in his life from 16 to 23 years old was spent in his Alma Mater, which not only left precious memories for him, but also made him make many friends for his whole life and set the direction of life. He also talked about the countless ties with HIT after graduation, and wished HIT greater achievements and glory in the new century.

With the coming of the centennial anniversary, alumni all over the world have donated to HIT to express their gratitude for the cultivation of their alma mater. Yao Lijun, the 1985 graduate of Metallic Material Department majoring in Metallic Material and Heat Treatment, chairman of Ningbo Jiangfeng Electronic Materials Co., Ltd., together with Pan Jie, a 1977 graduate of Metallic Material and Technology Department majoring in Metallic Material and Heat Treatment, the general manager of Ningbo Jiangfeng Electronic Materials Co., Ltd., jointly founded a company. At the briefing, the company planned to donate 10 million yuan to the Education Development Foundation of HIT for supporting the development and construction of the alma mater in the new century. Guo Bin, vice president of HIT and vice president of the Education Development Foundation, together with Yao Lijun and Pan Jie, reached a donation intention on behalf of the university and the enterprise.

Yao Lijun was born and grew up in Harbin University of Technology. His father came to HIT in 1953 to study as a postgraduate student, and then stayed in school as a teacher. He was admitted to the Metallic Material and Heat Treatment major in 1985, and obtained bachelor degree, master degree and doctor degree consecutively, and then went abroad for further study and work. In his speech, he said that he was deeply influenced by the spirit of “Eight Hundred Heroes” of HIT since he was young. He kept repaying the motherland with science as his ideal and returned to China in 2005 to start his own business. Now the company has already been listed and has become a leading company in the field of ultra-high pure metal materials and sputtering target materials.

All members of the Standing Committee of the CPC of HIT, assistant presidents and heads of relevant departments attended the meeting. Representatives of aged teachers, Honorary President and honorary Vice President of Alumni Association and 100 representatives of Alumni Association at home and abroad were invited to participate in the briefing. All teachers and students and alumni from all over the world also watched the briefing on the internet. 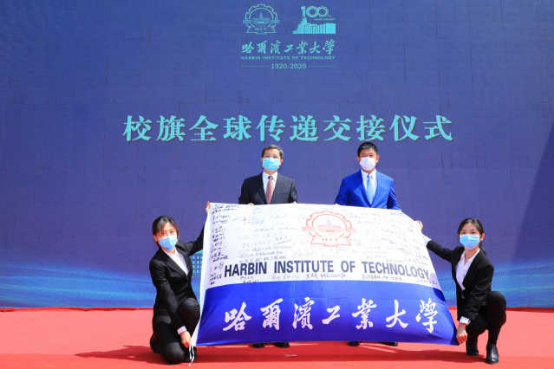 Xiong Sihao, Chair of University Board, on behalf of HIT, received the School Banner that has completed the global transmission. 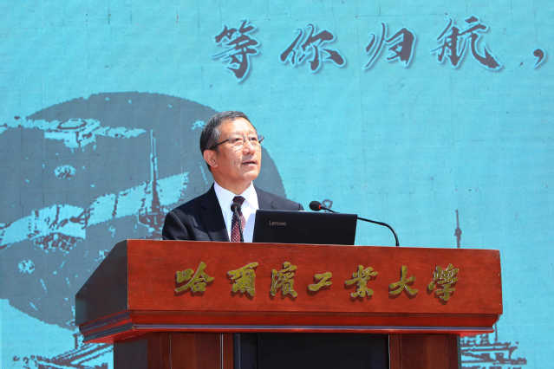 Zhou Yu, President of HIT and HIT Alumni Association, delivered speech on behalf of the university. 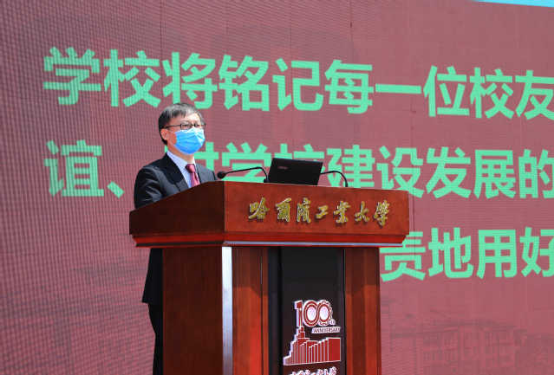 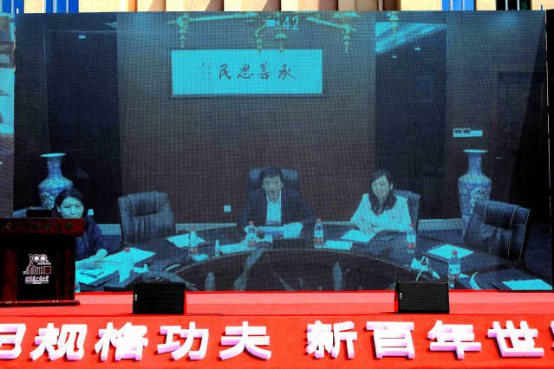 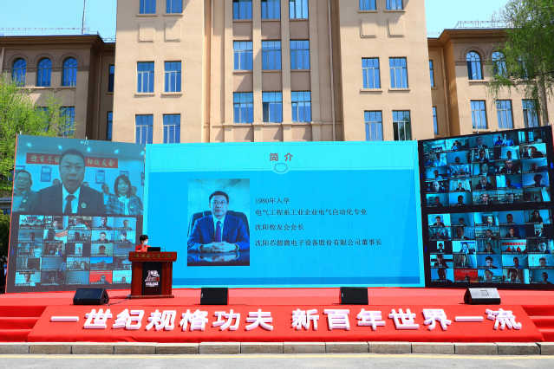 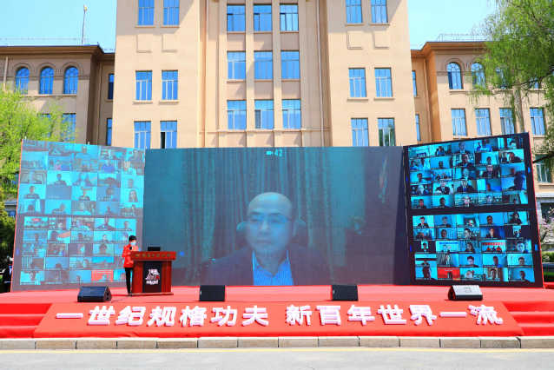 Jin Haiping, Chairman of the Board of the Alumni Association of Silicon Valley, delivered his speech. 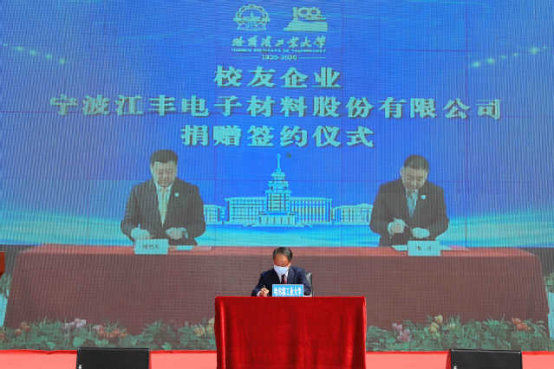 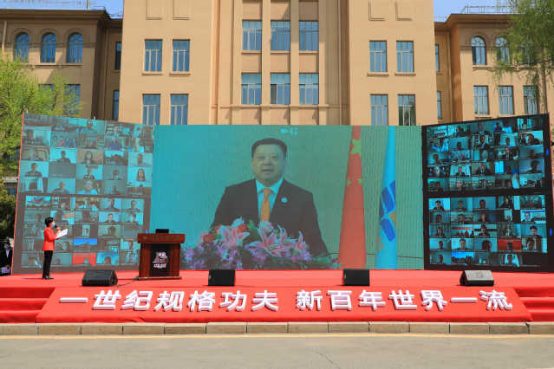 Glory of a Century, HIT Centenary Celebration Held on the “Cloud”

In the "Cloud" ---A Start of Online Graduation Practice